Our “Center of Excellence” program has been a staple of FCD-ETX the past few years in helping connect, develop, and grow the game here in East Texas. By offering this supplemental training program, FCD-ETX aims to help EVERY player reach their potential under the supervision of our professional staff and in our professional environment.

Over the past years much attention has been brought to this program and just how impactful it can be for soccer communities. So much so that in the early parts of 2019, a historic partnership was created between FCD-ETX and Henderson Soccer Association to help further the game in the Henderson community. Out of that relationship was born the “Center of Excellence” presented by Henderson Soccer Association in the Fall of 2019. We are proud to announce that we had over 100 registered players attend the Henderson CoE and future plans are to continue the overwhelming success of the program in the Spring of 2020.

This partnership just goes to illustrate how powerful the impact soccer has on communities and young players. Between the two organizations, both played their part in creating a positive and meaningful soccer experience that will hopefully ignite a passion for the game. We look forward to the continuation of this partnership on behalf of the youth there in Henderson and we also look forward to the wonderful things to come from Henderson Soccer Association.

Here is a recent piece that was featured in the Henderson Daily News on behalf of the two organizations and their partnership. It reads:


“Henderson Soccer Association and FC Dallas East-Texas have formed a historic training partnership that has brought new life and a fresh outlook to the young soccer players in our small city. FCD-ETX, is the official affiliate group of FC Dallas in Frisco, Texas of Major League Soccer. Through their status as an official affiliate group, FCD-ETX offers what no other club can in the East Texas area. That is: a professional coaching staff, curriculum, and programming. Under the direction of Juniors Director-JoJo Juarez, a Henderson native and 2006 Henderson High graduate, FCD-ETX has now reached new heights in helping connect, develop, and grow the game in our East Texas communities.

Since months back, Henderson Soccer Association has actively sought out FCD-ETX and identified them as being the best potential candidate to partner with in order to bring about a better quality soccer experience to the registered players of HSA. After much thought and strategic planning, both parties agreed to open FCD-ETX’s flagship program the “Center of Excellence” in Henderson.

The “Center of Excellence” program is a training program offered by FCD-ETX which uses a professional coaching staff and curriculum to provide 90 minute training sessions once a week, for an 8 week block. This program is in its 5th week already and has over 100 current registered HSA players in it. In the words of director of coaching JoJo Juarez “the CoE provides each player with a low-risk, high-reward environment which is all centered around creating a positive soccer experience.”

The ultimate goal throughout this partnership is to provide each player and coach in Henderson Soccer Association as many platforms and pathways to grow as possible. Each player is an individual in their needs and goals within the game of soccer and therefore, HSA and FCD-ETX have partnered in order to accommodate as many of those needs as possible to serve those players. The future is bright for Henderson and its soccer community.

FC Dallas-East Texas and Henderson Soccer Association would like to thank all the community leaders that made this seasons “Center of Excellence” possible. Please feel free to stop by Henderson High School practice fields on Sundays from 4:30-6pm to check out the CoE in action” 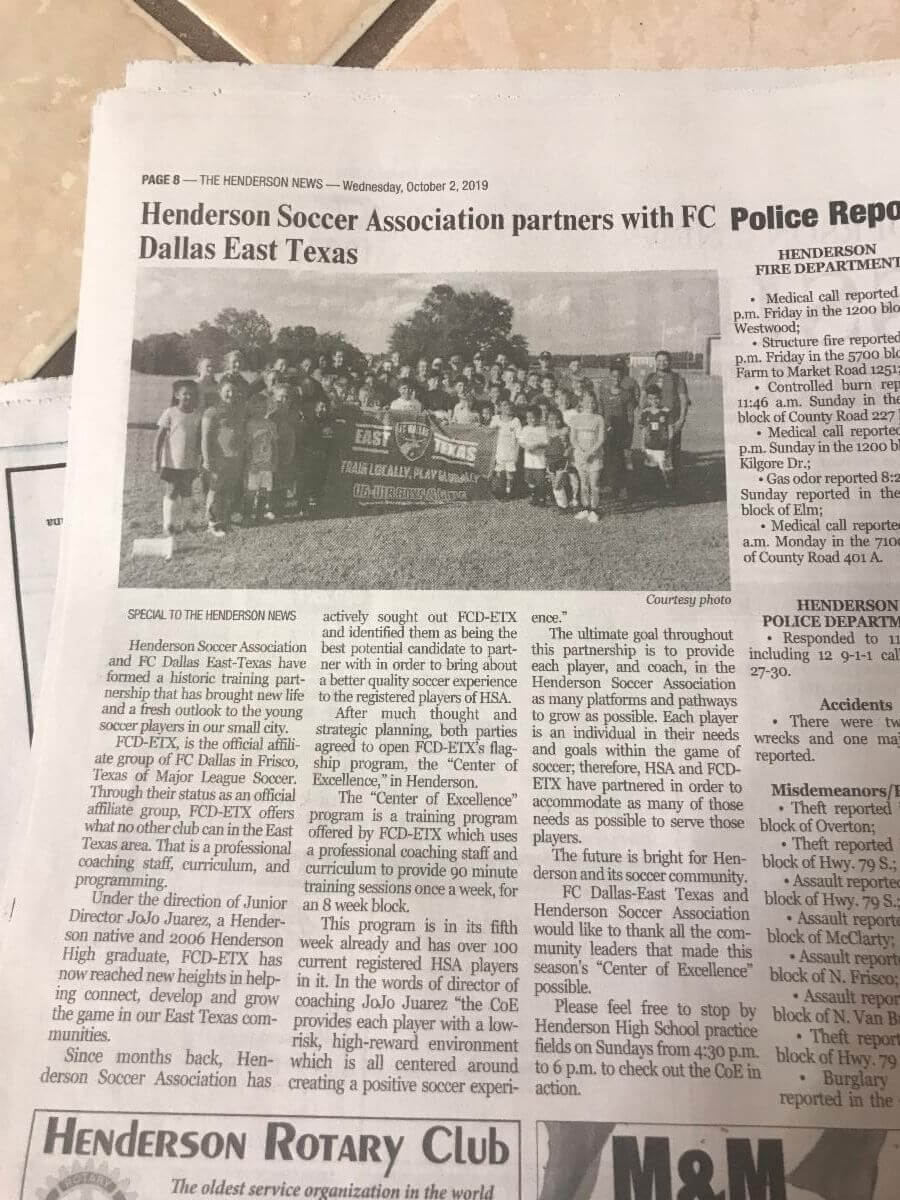